The Human Alien From Venus, 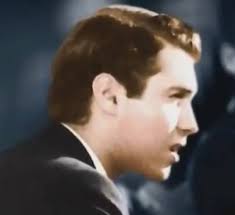 During the winter of 1956-57, the
Washington, D.C. area was extremely cold, but it was
a good feeling to be working in a high security
position in the Pentagon. I lived only a short
distance away in Georgetown, the old section of the
Nation’s Capital. Senator J.F. Kennedy lived on “O”
Street just a block away from our house on Prospect.

During a successful tour with the
U.S. Naval Ceremonial Honor Guard, we had met with
astronauts Glen, Cooper, Waly Sherrar, who were the
first wave of successful space travelers. Also we
had visited the Tomb of the Unknown Soldier numerous
times. It seemed like every time a visiting
dignitary came to Washington, they lay a wreath at
the tomb.

We had met the Queen of England
several times at the airport, as these were some of
the duties I performed as a young officer in the
Navy. After carrying the 2-Star flag at the funeral
of my late uncle, Rear Admiral Richard E. Byrd, I
was recommended for a security clearance and was
granted a Top Secret Clearance after a lengthy
six-month background study (B1 complete 1957). After
being transferred to the Chief of Naval Information
(CHINFO), I worked in the Security Clearance section
before being indoctrinated into the branch office of
the Air Force called PROJECT BLUE BOOK. It was a
joint service office; that is, two Marines, two
Army, two Navy and three Air Force officers.

The work was routine, opening
incoming mail, sorting out what was called actual
sightings as opposed to many fake UFO photos. We
also acted as a Public Information Office (PIO),
much like a public relations office.
Every publisher’s dream was to get the real low down
on the UFO situation, which was suppressed by the
group that dictated national policy on the UFO
matter.

In mid March, 1957, we received an
urgent message from the Alexandria Police
Department. The message indicated that two of their
on-duty police officers had picked up an alien who
had landed some 14 miles south of Pentagon
Boulevard, and the occupant was transported to the
Pentagon to meet with the Under Secretary of Defense
and then shuttled underground to meet with President
Eisenhower and Vice President Richard Nixon. The
meeting lasted for nearly an hour and then, the
alien visitor was put on VIP status and was shuttled
back to the Pentagon where he spent the night in the
Army reception office on the first floor near the
concourse. This alien’s name was Valiant Thor.

Commander James was on duty at the
Security Clearance and Review for the branch officer
of the Project Blue Book. He oversaw the meeting
through official channels and reported the landing
and meeting of the “space emissary”, as he was
labeled by the Department of Defense, to a governing
group of high military officials including Secretary
of Defense F.F. Forestall and other scientific men
of which there were twelve. They in turn made recommendations
to the President and Cabinet members, the CIA, FBI,
NSA, and so on.

The landing of Valiant Thor was
perhaps the first documented landing of a human-type
alien by military officials. He contacted an
individual in the Pentagon who was an advocate of
the UFO alien situation. “Nancy Warren” in turn
contacted a minister, who was also a private
investigator and theologian, a Dr. Frank E.
Stranges, who then met with this individual. Dr.
Stranges had been a guest speaker at the National
Evangelistic Center for two weeks.

Val Thor landed in Alexandria and
met with the President to discuss the world’s
problems and offer advice
and counsel on how to deal with and eliminate them.
Safe to say that the problems he was discussing were
more complex than savings bonds. He indicated to Mr.
Eisenhower that the world was in a precarious
situation and that if the world continued to proceed
on a war footing – it would cause an economic
imbalance throughout the world. Val Thor stayed on
Earth until March 16, 1960, and then disembarked to
his home planet Venus.

He indicated that his race of people
lived and dwelled underground and that many of the
planets throughout the universe sustain life in this
same manner. He also mentioned the waves of aliens
who would land around the world to help with the
Earth’s seemingly insurmountable problems. He stated
that a group from a distant planetary system would
be coming to give aid and data to help the Earth’s
progress. Val Thor spoke of Christ’s presence in the
universe and that it was heartwarming to see
Christ’s advanced teaching continuing. This
visitation at the Pentagon marks perhaps a new era
in knowledge,
wisdom and understanding on our planet.

The book “Stranger at the Pentagon” tell us a very peculiar story about
an extraterrestrial on a mission. His name was Valiant Thor and many
believe that he was real.8:00 AM, March 16, 1957. Valiant Thor arrived in a ship,
which landed in Alexandria, Virginia in an agricultural field. According
to Dr. Stranges, Thor was about 6 feet tall and 185 pounds with brown,
wavy hair and brown eyes. The police were the first on the scene and
found him calm with only one request: to meet with President Eisenhower.So they took him through the Pentagon where he met with
the secretary of defense, and later with Eisenhower, Nixon, and all the
joint chiefs.Valiant Thor remained in the United States for three
years. Acording to the book he had been sent to Earth by the High
Council to intervene on behalf of the intergalactic community. They were
worried with our nuclear capabilities and how nuclear warfare could
lead to the obliteration of the human race.

As outlandish as the claims seem to be, photographs have
surfaced of Thor meeting with top officials and no one has stepped
forward to dispute them.Dr. Frank Stranges, the author of “Stranger at the
Pentagon” was a federal marshal and chaplain who had top-secret security
clearance at the Pentagon. Stranges’ account was backed up by Harley
Byrd, the nephew of Admiral Richard E. Byrd, who worked for the
Department of Defense from 1957 to 1963 and was assigned to Project Blue
Book, the secret military program that investigated UFO reports.Even members of President Eisenhower’s family, including his great granddaughter, Laura Eisenhower, insist the story is true.This same story was told by the late Phil Schneider, a
geologist and engineer who said he had level-1 security clearance in
secret government projects. He helped build underground military bases
and worked at the famed Area 51 base.Schneider said he also met Thor and he had leave earth in the 50’s.Of course this story is highly controversial and many
believe it is just Strange’s imagination. But can we deny that many
governments know about the existence of extraterrestrials? Maybe, even,
had direct contact with them? Many are the tales about Kings and Leaders
contacted by “gods” or “messengers” in the past. Maybe Valiant Thor was
just another extraterrestrial guiding us.

Leave a comment. Conspironatrix would LOVE to hear from you Cancel reply